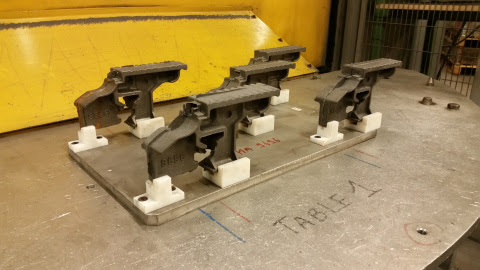 VHM Fonderie (formerly Heinrich Fonderie), which specializes in the production of various types of industrial iron castings using the traditional sand casting process, utilizes its Stratasys Connex Multi-material 3D Printer across a broad spectrum of applications throughout product development. This includes everything from the production of functional prototypes and master models for sand casting, to manufacturing tools, as well as the 3D printing of spare production parts for certain tooling machines.

“To manufacture an object using the sand casting process, we need to first produce a master model of the specific part,” explains Laurent Poux, industrial director, VHM Group. “This is then used to make a mold, from which the desired object itself is then manufactured. In the context of the end-to-end manufacturing workflow, the level of time-saving enjoyed with 3D printing isn’t merely improvement or progression – it’s transformational.

“With 3D printing, we save about a month when it comes to producing the various models used to create our molds. This enables us to deliver orders for our customers incredibly quickly, which has in turn improved our capacity,” he adds.

Such time-savings allows VHM Fonderie to reduce product development time for the many castings it manufactures for its clients. As well as the VHM Group’s other businesses, this comprises a number of external clients – among them, Paris landmarks like the Le Jardin des Tuileries, Le Caroussel du Louvre and La Place Vendôme, as well as companies like flow management solutions provider, Flowserve.

According to Poux, 3D printed molds are just one application in which its Stratasys Connex 3D Printer is deployed. Another area of use is in the production of various tooling items, such as positioning jigs that are used across the assembly line to increase production efficiency. The 3D printer’s use has even been extended to replacing obsolete parts for the company’s tooling machines, such as its belt sander machine, providing VHM Fonderie with a new level of versatility in production.

“Use of Stratasys 3D printing technology has given us a level of self-reliance that has not only revolutionized some of our traditional production processes, but it has allowed us to become significantly more flexible as a company when it comes to manufacturing,” says Poux. “We’re really excited to be able to extend the benefits of 3D printing to our customers through Reali3D, where we expect to produce everything from concept models and fully-functional prototypes, to assembly tools for the production line.”

“VHM Fonderie is the perfect example of how a growing number of manufacturers are not merely exploring the use of 3D printing in a limited capacity, but are reaping multiple benefits through its widespread integration across all areas of production,” says Andy Middleton, president, Stratasys, EMEA. “Stratasys remains committed to educating the market and working closely with customers to ensure that, like VHM Fonderie, they maximize the full potential of 3D printing technology to reduce time and costs within their manufacturing operations.”

For more than 25 years, Stratasys Ltd. has been a defining force and dominant player in 3D printing and additive manufacturing – shaping the way things are made. Headquartered in Minneapolis, Minnesota and Rehovot, Israel, the company empowers customers across a broad range of vertical markets by enabling new paradigms for design and manufacturing. The company’s solutions provide customers with unmatched design freedom and manufacturing flexibility – reducing time-to-market and lowering development costs, while improving designs and communications. Stratasys subsidiaries include MakerBot and Solidscape, and the Stratasys ecosystem includes 3D printers for prototyping and production; a wide range of 3D printing materials; parts on-demand via Stratasys Direct Manufacturing; strategic consulting and professional services; and the Thingiverse and GrabCAD communities with over 2 million 3D printable files for free designs. With more than 2,700 employees and 1,200 granted or pending additive manufacturing patents, Stratasys has received more than 30 technology and leadership awards.