The Bricsys Australasia Conference in Brisbane : Musings from a Sales Partner 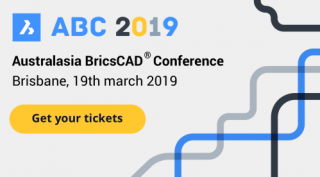 March 19th, 2019 has been a momentous day for BricsCAD in Australia. The first-ever Hexagon supported but largely sales-partner funded and managed day-long conference took place at the iconic Brisbane Convention and Exhibition Center (BCEC), just next to the Queensland Performing Arts Center, in the most happening part of the city. 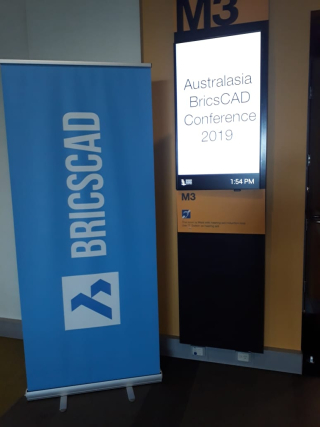 The BCEC beckons all to the Bricsys conference again, with the BricsCAD livery

The event is an ambitious first by the Bricsys Sales partner SOFOCO (supported by CADConcepts from New Zealand) and has been in planning for many months now, and I knew about it from the time of the 2018 Bricsys International Conference in London itself.

Damian Harkin of Sofoco Systems and Jason Bourhill of CAD Concepts, New Zealand are among my best friends in the Bricsys partner network and invited me over for the conference, and this was something I could not say no. I knew this is going to be a bold and game-changing conference in the Bricsys partner network, and I found enough inspiration and reasons to make this ten-thousand kilometer trip from Bengaluru, India.

Post-the-Hexagon acquisition, this is the first conference that is happening and I was here to be part of the show. 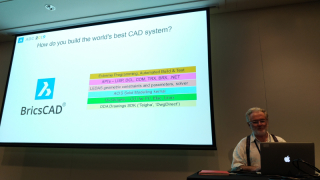 It was a great pleasure to meet up again with hosts Damian & Jason, bloggers Ralph Grabowski & Steve Johnson and Michael Smith, the lone Hexagon representative, from Seattle, USA. 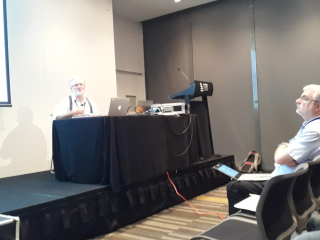 To handle the technical demonstrations, there was Heidi Hewett and Pieter Clarysse from Bricsys, who traveled all the way from Colorado (USA) and Belgium respectively. 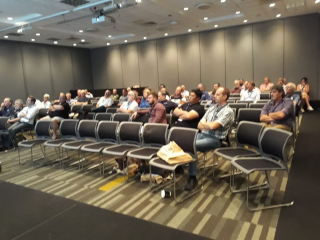 The event kicked off in the morning 0930 QLD time, with Damian Harkin welcoming the guests and taking us through threads of trivia outlining the history of Bricsys, the history of BricsCAD, CAD software, among others. Among others, he also gave us a glimpse of the vision of CEO Mr. Erik de Keyser, who made it all happen. 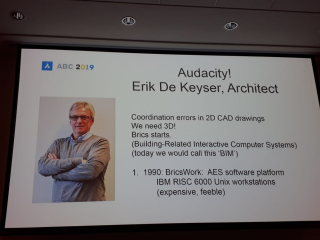 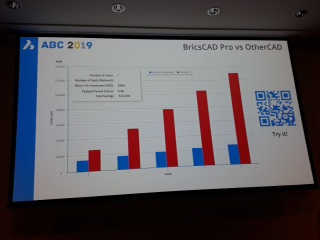 For the guys who sign the check, here is the arithmetic of economics

Next up, Jason Bourhill of CAD Concepts – New Zealand explained BricsCAD Mechanical in such detail and clarity that it would put some of the biggest names in the 3D Solid modeling software world to shame.

Of particular interest and Wow! factor was the ease with which he would animate the components of an assembly and show how the sequence in which it would fit in. It was then I realized the BricsCAD is not just a 3D modeler but could also build the complete assembly instructions for a model and create detailed design documentation as well.

Unfortunately, it appears my camera has had a memory freeze and I cannot find the pictures of the mechanical presentation that Jason delivered. I have asked Jason for the pictures because they are worth a post by themselves. And when I get them, you will see some more BricsCAD manna from me.

Jason is a programmer as well and his presentations reflect his skills. The BricsCAD 3D modeling demos he shows are always peppered with macros and formula-based animations that give life to otherwise dull models – and show you a side to modeling that you never knew existed.

Like with every software, it is that last-mile extra that delivers that leveraged high-performance advantage. I must say that 3D direct modeling and automatic design documentation and dynamic view updates is a given in BricsCAD. With the animation rules that can be applied to 3D models, you have in BricsCAD, a set of features that only software 3X the price can boast about.

This was followed with a joint presentation of BricsCAD V19.2 new features by Heidi Hewett and Jason Bourhill. In many ways, this conference was an interim opportunity to tell the world the new features of V19.2, a major mid-cycle release of BricsCAD that was released few weeks back. Although the major versioned release happens once a year, a mid-cycle release packs so many new improvements, features and fixes that it is worth a celebration – and that is what the Brisbane conference has achieved to tell the world.

Next up, Ralph Grabowski educated us about the history of CAD, notably .dwg, taking us from the times of the early DWG viewers to the various organizations that dabbled playing with .dwg software in the past 30 years. 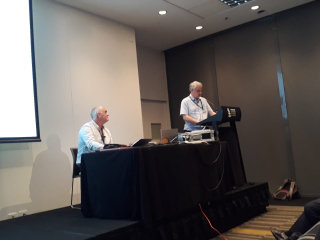 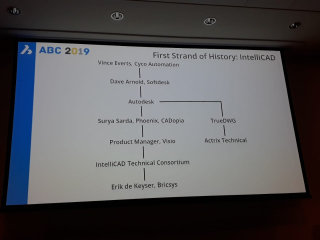 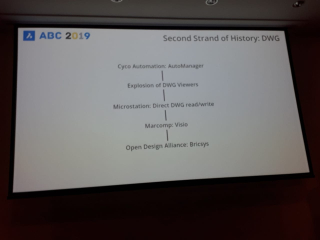 The three slides above are from Ralph Grabowski’s down-the-memory-lane presentation, The History of .dwg CAD.

Post lunch, it was Heidi Hewett all the way with BIM and she showed the new features on BricsCAD BIM and how they stack up against the challenging requirements of of the industry and also how they have exceeded or bettered the competition.

Of importance to note was the fact that BricsCAD BIM is as focused on building the industry-standard and platform-neutral IFC import/export capability as it is on ensuring the Revit data is imported with ease.

We were shown how Revit RFA files were imported into BricsCAD with ease.

If there is one thing I can crystallize out of all the new features and improvements that Bricsys is adding to BricsCAD, it is the productivity factor. Version 19.2 comes with over 200+ productivity tweaks, improvements and bug fixes that are all a direct result of user feedback.

Now, that is what makes it relevant to the user. Bricsys is a company with its ear to the ground. It listens, it reacts and it delivers. It gives us, the sales partners an opportunity to reach out again to the users with a new story, tell them about the support requests and feedback and show them it was resolved.

While many companies and products develop a hugely corporate personality, it is heartening to note that BricsCAD is still in listening mode today. And this is the DNA for success, growth and goodwill, and we hope this continues into the future. 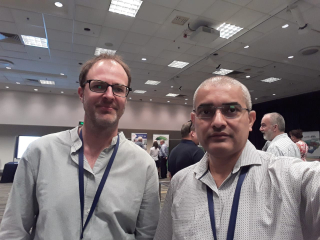 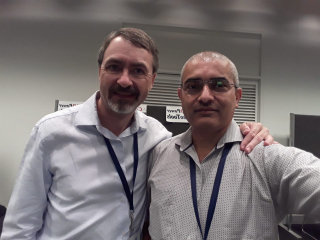 I managed to get a picture with these two gentlemen above. Would have loved to capture more! 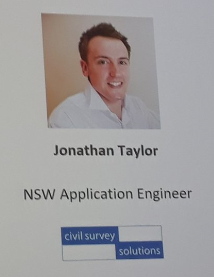 In the customer/application developer success story presentation, Jonathan Taylor from Civil Survey Solutions took us through some really impressive workings of the software, during which he showed how effortlessly he manipulated contours, grading and daylighting conditions to dynamically update the 3D model with the whiff of a cool breeze. 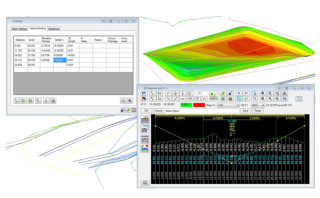 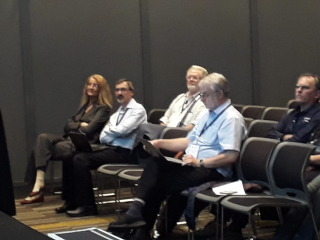 The event has been covered live by bloggers Ralph Grabowski and Steve Johnson. I was able to capture a grab of the media-men at work.

The Closing Address by Michael Smith 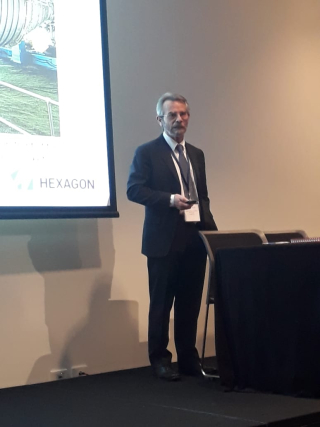 Michael Smith is the head of Operations for Asia @ Hexagon PPM and is based out of Seattle. He was here to represent the parent company and has assured us that Hexagon is backing Bricsys completely: financially and with its relationships. That is great news indeed and we hope this is extended to sales partners & bloggers who are all sizeable contributors, if not more,  to the bottom-lines of the parent companies. Technology products need a lot of investment in skills and resources to understand them and an equal amount to resources to tell & communicate the same to the world.

In other messages, Michael said his company firmly believes in keeping the perpetual licensing intact and has no plans to scrap the same. Hexagon PPM would like to leverage their relationships with large companies (especially in the Oil & Gas, EPC and other infrastructure sectors) and introduce BricsCAD with velocity in these organizations. This may mean that some of these engagements will be signed at the global HQ level and not at each country levels.

Allaying fears of reseller partners, he has assured that the existing partner network will be carried forward and we will work together towards inclusive growth and a win-win situation for all. Being a large monolith with several divisions of verticals and functions, Mr. Smith admitted that change and decision making will happen for sure, but not at the pace one would expect in the times of privately held Bricsys.

BricsCAD is today the number one in the .dwg race, but others are catching up fast and the gap seems to be closer now than before. Velocity of change and the nimbleness to change and adapt is important and Hexagon must take note of the same.

I believe that there is enough room in the industry today to multiply our business 10x or even more. While growth, additional partners, new sales policies are welcome, we would like to see an inclusive growth going forward.

The amount of goodwill and trust BricsCAD enjoys with its user-base is due to the tireless efforts of its global sales network also, and not just due to the wonderful product that the Bricsys developers created. 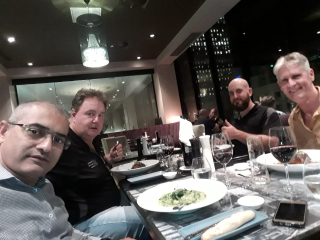 I did not come alone to this event. I got two of my long-standing clients, dra Systems, based out of Albury in New South Wales also to attend. dra Systems was introduced to BricsCAD by me in the year 2010 and since then, they have ported the popular HVAC application draPRO from AutoCAD to BricsCAD also. Today, draPRO has customers using on the BricsCAD platform as well. The after-event party culture has rubbed off to the eco-system partners. We met up in the evening to unwind at The Charming Squire, a micro-brewery that dished out all flavors of locally brewed hop & malt beverages and some of the choicest Australian wines.