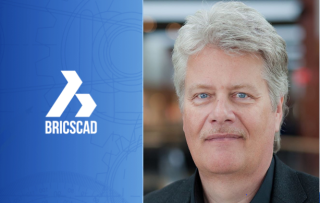 Known to the twitterati of CAD world as @RGCADMan, Robert Green is the new GoTo guy in Bricsys who helps large companies migrate from AutoCAD to BricsCAD. He is officially designated as the Director of Implementation and is entrusted with the job of advising the IT heads and systems guys of large engineering design companies to make the switch to BricsCAD.

Admittedly a huge responsibility, but his job is now easier than ever before, with the level of maturity the platform of BricsCAD offers, with the added benefits of a large eco-sysytem of applications and partners.

I had the good opportunity to touch-base and talk to the ninja himself and how he goes about his work. No rocket science here, but when a respectable CAD figure like Robert Green speaks, large companies sit up and listen. Remember that this is one of the new and growing team in Bricsys that is comprised of the of notable ex-Autodeskers.

And here is the central message from him, “Wherever you are, contact me directly for any implementation and migration issues. We are here to listen to you”, said Robert Green.