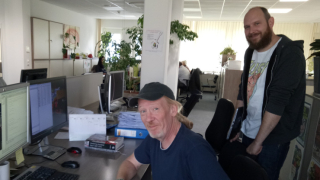 Read the third part of this case study by veteran CAD blogger and journalist Steve Johnson as he embarks on a hands-on customer visit and evaluation to see how BricsCAD is making all the difference to a large engineering company Schrack Seconet in Vienna, Austria.

In this post I continue the interview CAD guy Martin Harrer and IT guy Germar Tischler from Austrian fire alarm, security and communications systems company Schrack Seconet. In this part I ask about users who are resistant to using BricsCAD, interchanging drawings with other parties, and the IT implications of using BricsCAD.

So do you have any users who are resistant to using BricsCAD?

Martin: We have one user who won’t use it because of the color of the BricsCAD interface. He wants it dark.

Germar: Yes, if there were a dark thing… You know how Microsoft apps now have a dark mode? That would be one thing that would win over that one person.

Martin: Yes, it’s just one person. He says it’s hard on the eyes.

So what does he do?

Martin: He uses AutoCAD®! But if he wants to use our software he has to use BricsCAD.

Germar: Which he also does!

Martin: He has to! Or he makes it by hand, but it’s much slower.

Tell me about the sort of issues you have dealing with interchanging .dwgs with other parties.

Martin: We work with lots of different customers and drawings of all sorts of standards here. Lots of errors in the drawings, great drawings, scanned drawings, PDFs, everything. We work with big electrical companies too, sending plans back and forward, to architects and planners too.

I have several versions installed on my computer, because sometimes there are drawings that open easier with, say V15 than the current version.

So you have to open with the old version, re-save and then it’s OK in the later version?

Martin: Yes, mostly. Sometimes we have trouble with AEC objects giving us headaches. But I know they give AutoCAD® users headaches too!

Yes, we had that in our AutoCAD®-based environment too. They cause problems for everybody.

Martin: We also have an AutoCAD® install because we use the EXPORTTOAUTOCAD command which sometimes works if we have no other option. That’s why we keep the AutoCAD® install but we use it maybe three times a year.

Germar: We have one AutoCAD® license in each of our branch offices for things like conversions.

Martin: And sometimes to demonstrate to people that a .dwg won’t open in AutoCAD® too! Sometimes people don’t believe it when we say there’s a problem with the file so when we can’t open it in AutoCAD® we can just say, “What now?”

Yes. I also dealt with importing drawings from lots of outside sources and coming across problem drawings and even though it was an AutoCAD®-based environment I found it very handy to have BricsCAD there, because often you could open and fix a drawing in BricsCAD that you couldn’t even open at all in AutoCAD®.

Martin: Yes, we have this experience too. Sometimes we have really hard drawings. Really bad things.

So you’re providing these dwgs to people outside. Do you ever have people say, “I can’t deal with this, this is a BricsCAD .dwg”?

Martin: No. Maybe we’ve had one in the last ten years. He didn’t refuse to use the drawing, but we had some minor problems.

How long ago was that?

Martin: Five years, maybe. It wasn’t a big problem; we just saved it in another version and everything was fine.

Germar, you’re the IT guy who has to deal with distributing this, installing it, updating it. Can you tell me about your experiences with that?

Germar: Every time we release a new version I sit down with Martin and go over everything to make a snapshot. We set up an install routine and the user pretty much just has to start it. It runs through and everything’s fine.

So far we’ve had a really, really good run with it. The fact that the installer’s really small is nice.

It’s good that it’s not big. We have seven branch offices and depending on where they are in Austria, some of them don’t have a super-fast internet connection. Our smaller one in Innsbruck, they only have an 8 Mbps connection and that’s the best we can get in that location. So we just snapshot it overnight and because it’s only a couple of hundred MB that’s no problem.

As we mentioned, we do have one Autodesk license per branch office and that’s much more complicated. First, it’s at least 2 GB you have to transfer to the branch office. Then after the install sometimes you have to automatically do updates, which also include hundreds of MB or more of download which takes a lot of time. We’ve also had problems activating it. Back and forward, back and forward. Often it’s just something very simple, but it costs quite a lot of time and we don’t really have that problem with BricsCAD.

In the next part, I ask about LISP, maintenance and support.

Easy to try, easy to buy, easy to own. That’s BricsCAD. Try all of our products, for free for 30 days at www.bricsys.com. Freedom of choice, plus perpetual (permanent) product licenses that work with all languages, in all places. You’ll love what we’ve built for you with the BricsCAD product family.

Steve Johnson, owner of cad nauseam, has been a CAD specialist since 1985. His roles have included CAD management, development, consulting and technical writing. Steve has also been a contributing editor for Cadalyst magazine, President of the Western Australian AutoCAD User Group, and a Vice President of CADLock, Inc. He is also an international veteran fencing champion.