Chennai, India – Feb 4, 2013: Mastercam CAD/CAM software supplier CNC software Inc. has
realigned its corporate strategy with the intent of adding more marketing and
representation in India, and one of the first step the US company took was to
open an office with AMT – Chennai Technology & Service center, according to
Steve Bertrand, Director for International sales / Strategic partnerships.
Bertrand noted that the company has also started its new marketing blitz here
with its first corporate advertisement in this month’s inaugural issue of
Modern Manufacturing India, the parent of the MMI show Daily. 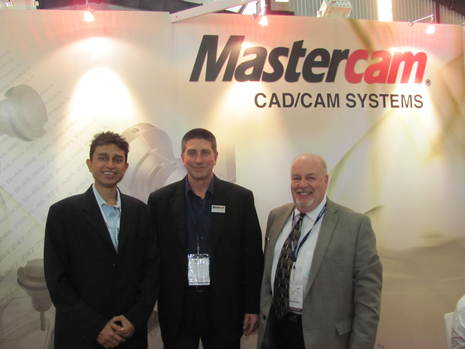 Speaking to the
newspaper at the company’s booth , Bertrand said the “explosive “ growth here
has caught the eye of management at the top echelons of the software supplier,
and they have decreed that additional resources be tasked for further
development of the business in the subcontinent. “India is our fastest growing
market by percentage” Bertrand said.

A general ban on
exports of 5-Axis machining centres to countries like India has forced local
machine tool companies develop the technology themselves, and their on-going
advancements have seen increasing demand for CAD/CAM software, which is often
required to refine machining processes employing such highly technical
equipment. Bertrand said India needs “home-grown” machining technology to meet
productive demands, and noted that the company’s software can help. He pointed
out that the level of technology currently employed at the Ford Plant in Chennai
is Top-notch, as are many of the products now made in India. “They are equal to
anything made anywhere else in the world”. he said.  Bertrand said his company is also in the
process of increasing its presence in India, which is expected to add to its
existing customer support network. In a recent move, the company has assigned
Dave Moskey as the Country manager for India.

The most recent
analysis of CAM software seats produced by the US consultancy CIMdata Inc.
showed that Mastercam is the World’s most widely used CAM software for the 18th
straight year. With close to 176,000 installed seats worldwide, Mastercam has
nearly twice installed base of the closest competitor, according to the survey.
Bertrand said the results of survey indicated how far the company has come in
its nearly three decades of business. The company will celebrate its 30th
anniversary in September, and the manager waxed nostalgic about the early days.
“The first Mastercam was written on an Apple Ile.”

The company’s
software occupies leading positions in a number of sectors. According to the
CIMdata survey, Mastercam holds almost 10 % of the industrial Market, and more
than 27% of the educational market.   Courtesy
IMTMA

For more
information on Mastercam http://www.mastercam.com